Understanding the types of Bariatric Surgery 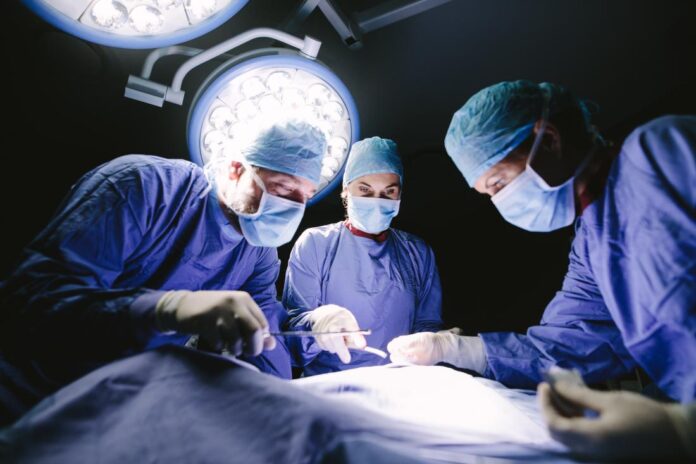 The type of surgery that may be best to help a person lose weight depends on a number of factors. You should discuss with your doctor what kind of surgery might be best for you or your teen.

What is the difference between open and laparoscopic surgery?

Open surgery may be a better option for certain people. If you have a high level of obesity, have had stomach surgery before, or have other complex medical problems, you may need open surgery.

What are the surgical options?

In the United States, surgeons use three types of operations most often:

In this type of surgery, the surgeon places a ring with an inner inflatable band around the top of your stomach to create a small pouch. This makes you feel full after eating a small amount of food. The band has a circular balloon inside that is filled with salt solution. The surgeon can adjust the size of the opening from the pouch to the rest of your stomach by injecting or removing the solution through a small device called a port placed under your skin.

After surgery, you will need several follow-up visits to adjust the size of the band opening. If the band causes problems or is not helping you lose enough weight, the surgeon may remove it.

The U.S. Food and Drug Administration (FDA) has approved use of the gastric band for people with a BMI of 30 or more who also have at least one health problem linked to obesity, such as heart disease or diabetes.

In gastric sleeve surgery, also called vertical sleeve gastrectomy, a surgeon removes most of your stomach, leaving only a banana-shaped section that is closed with staples. Like gastric band surgery, this surgery reduces the amount of food that can fit in your stomach, making you feel full sooner. Taking out part of your stomach may also affect gut hormones or other factors such as gut bacteria that may affect appetite and metabolism. This type of surgery cannot be reversed because some of the stomach is permanently removed.

Gastric bypass surgery, also called Roux-en-Y gastric bypass, has two parts. First, the surgeon staples your stomach, creating a small pouch in the upper section. The staples make your stomach much smaller, so you eat less and feel full sooner.

This surgery, also called biliopancreatic diversion with duodenal switch, is more complex than the others. The duodenal switch involves two separate surgeries. The first is similar to gastric sleeve surgery. The second surgery redirects food to bypass most of your small intestine. The surgeon also reattaches the bypassed section to the last part of the small intestine, allowing digestive juices to mix with food.

This type of surgery allows you to lose more weight than the other three. However, this surgery is also the most likely to cause surgery-related problems and a shortage of vitamins, minerals, and protein in your body. For these reasons, surgeons do not perform this surgery as often.

Surgeon places an inflatable band around top part of stomach, creating a small pouch with an adjustable opening.

Surgeon staples top part of stomach, creating a small pouch and attaching it to middle part of small intestine.

What should I expect before surgery?

Before surgery, you will meet with several health care providers, such as a dietitian, a psychiatrist or psychologist, an internist, and a bariatric surgeon.

These health care providers also will advise you to become more active and adopt a healthy eating plan before and after surgery. In some cases, losing weight and bringing your blood sugar levels closer to normal before surgery may lower your chances of having surgery-related problems.

Some bariatric surgery programs have groups you can attend before and after surgery that can help answer questions about the surgery and offer support.

What should I expect after surgery?

Walking and moving around the house may help you recover more quickly. Start slowly and follow your doctor’s advice about the type of physical activity you can do safely. As you feel more comfortable, add more physical activity.

After surgery, most people move from a liquid diet to a soft diet such as cottage cheese, yogurt, or soup, and then to solid foods over several weeks. Your doctor, nurse, or dietitian will tell you which foods and beverages you may have and which ones you should avoid. You will need to eat small meals and chew your food well.

How much weight can I expect to lose?

The amount of weight people lose after bariatric surgery depends on the individual and on the type of surgery he or she had. A study following people for 3 years after surgery found that those who had gastric band surgery lost an average of about 45 pounds. People who had gastric bypass lost an average of 90 pounds. Most people regained some weight over time, but weight regain was usually small compared to their initial weight loss.

Researchers know less about the long-term results of gastric sleeve surgery, but the amount of weight loss seems to be similar to or slightly less than gastric bypass.

Your weight loss could be different. Remember, reaching your goal depends not just on the surgery but also on sticking with healthy lifestyle habits throughout your life.

The FDA has approved several new weight-loss devices that do not permanently change your stomach or small intestine. These devices cause less weight loss than bariatric surgery, and some are only temporary. The devices may have risks, so talk with your doctor if you’re thinking about any of these options. Researchers haven’t studied any of them over a long period of time and don’t know the long-term risks and benefits.

What are the side effects of bariatric surgery?

Side effects may include

Other side effects may occur later. Your body may not absorb nutrients well, especially if you don’t take your prescribed vitamins and minerals. Not getting enough nutrients can cause health problems, such as anemia and osteoporosis. Gallstones can occur after rapid weight loss. Some doctors prescribe medicine for about 6 months after surgery to help prevent gallstones. Gastric bands can erode into the stomach wall and need to be removed.

Other problems that could occur later include strictures and hernias. Strictures—narrowing of the new stomach or connection between the stomach and small intestine—make it hard to eat solid food and can cause nausea, vomiting, and trouble swallowing. Doctors treat strictures with special instruments to expand the narrowing. Two kinds of hernias may occur after bariatric surgery—at the incision site or in the abdomen. Doctors repair hernias with surgery.

Some research suggests that bariatric surgery, especially gastric bypass, may change the way your body absorbs and breaks down alcohol, and may lead to more alcohol-related problems after surgery.

Several different kinds of tumors can grow in bones: primary bone tumors, which form from bone tissue and can be malignant (cancerous) or benign (not cancerous), and metastatic tumors

Chest pain as a symptom of Heart Attack

The Inept “Puppy Syndrome” and a COVID-19 Suicide Effect

Now Is the Time To Quit

Children with no COVID-19 symptoms may shed virus for weeks

Early-onset Alzheimer’s and Its Misdiagnosis Tragedies

Fifty samples of breast milk drawn from across the US all tested positive for PFQAS contamination, at levels 2000 times higher than those suggested safe by the EPA

Wuhan Was Not the Source of the Coronavirus, According to Research