Lisa Stockman-Mauriello is dying of ALS. She wants a drug, Torfersen, that could extend her life and Biogen has said no 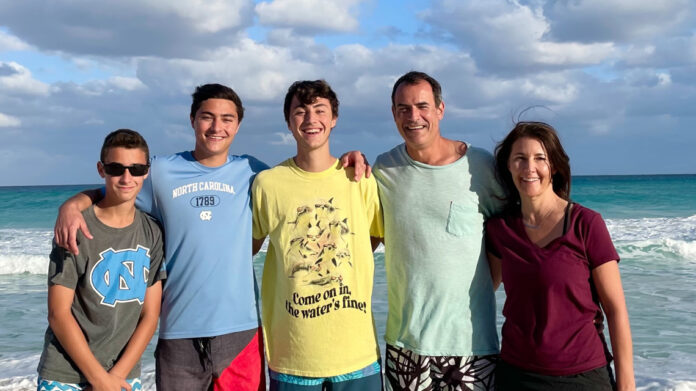 Lisa Stockman-Mauriello is dying from ALS, but a pharmaceutical company, Biogen, is trialing a new drug called Torfersen that may buy her a little extra time. A few precious weeks, or perhaps even months to spend with her three sons. Biogen has declined her request to be given access to the as yet, FDA unapproved, drug, they’ve ignored a petition signed by thousand and now Lisa is facing the very real prospect of not being able to benefit from this novel treatment. This is her story.

Lisa‘s heartbreaking story centers around her struggle for access to a drug that will be a game-changer in her fight to live longer. She’s not asking for miracles, just long enough to see her kids graduate in a few months. One from college, one from high school, and one from the eighth grade. It’s a simple wish of a dying mother.

Lisa is already very sick, and her husband Bob is slowly becoming her voice. She was diagnosed with Bulbar ALS, a very rare kind of ALS that progresses rapidly because of the mutation of the SOD1 gene. It’s quickly robbing her of the ability to speak, the ability to move, and will, if left unchecked, soon result in her death. It is a family tragedy and it heartbreaking to watch it unfold.

A new drug, now in clinical trials, might help Lisa live longer. She’s hopeful the drug could help buy her those extra few months. Lisa’s physician, Dr. Neil Shneider, a neurologist and Director of the Eleanor and Lou Gehrig ALS Center at Columbia University, said this drug may indeed help her. In a public statement, he said the following;

“I think there is evidence to suggest that this therapeutic would be helpful to her, and you know, in ALS, we don’t have a lot of therapeutic options, we are very limited as to what we can offer our patients, so I feel this is her best chance, for a therapeutic that could make a meaningful difference in her disease,”

It would seem like an open and shut case, but there is a problem. Biogen is the developer of the drug Tofersen, The drug does not as yet enjoy FDA approval and is currently in Phase 3 clinical trials. Accpetance dates for the current trials closed two weeks before Lisa was diagnosed, effectively excluding her.

Lisa, Bob, and her family officially petitioned Biogen asking for this drug. So has Dr. Shneider, as well as tens of thousands of supporters who signed a petition asking Biogen to let her have Tofersen under compassionate use. The answer came late last week in a letter. Biogen said no, denying Lisa’s request.

Here then Dr. Maha Radhakrishnan, MD, the Chief Medical Officer of Biogen, in his response to Lisa.

“Let me begin by expressing my personal, and our team’s collective empathy upon learning of your ALS diagnosis. We can only imagine the magnitude of the devastation that you and your family must be experiencing. Since we learned of your request for early access to Tofersen, which is still being tested in a clinical study, we’ve rapidly brought together our medical, research, regulatory and senior leadership colleagues to thoroughly evaluate and challenge our own policies in light of the situation for you and other people with ALS. We have also been in touch with your physician since we received your request.

Obtaining approval for a new drug from regulatory authorities around the world is the fastest way to help the largest number of people with a specific disease and requires the completion of clinical testing. Until efficacy and safety are determined, we must act with the interests of all patients in mind. Providing individual access to Tofersen at this time could jeopardize access to Tofersen for hundreds of SOD1-ALS patients by impeding our ability to complete the study that will determine whether Tofersen is efficacious and safe and to seek subsequent regulatory approvals as quickly as possible.

Our study has completed enrollment and data results are expected in the second half of this year. I want to assure you that we are working as fast as we can. We are preparing to open an Early Access Program soon after there are no more patients in our study who are on placebo and Tofersen has shown sufficient efficacy and safety to represent a positive benefit-risk for ALS patients”

Lisa meets most of the criteria for what’s called “expanded use” under FDA guidelines. In effect, this means she could be given the drug for “compassionate use” if Biogen agrees to sign off on it. Lisa, and her family, and the thousands supporting them, are hoping Biogen will reconsider.

More than 60,000 people have signed this online petition to Biogen and if you have a moment, we strongly encourage you to add your signature. Just click on the link above.

Here is the WCNC video interview with Lisa and large portions of this article have been reproduced from their article, which you can find here.

The following is a statement Lisa released that is on the Petition website.

I am Lisa Stockman-Mauriello, a wife and mother of three beautiful sons, and I am fighting for my life and asking for your help. I’ve spent my 30-year career in the field of pharmaceutical healthcare communications, and now, ironically, I am fighting to get access to a medicine designed to save the life of people like me. Every week, I am rapidly declining from bulbar ALS which is caused by a mutation to my SOD1 gene. The pharmaceutical company, Biogen, has a late-stage medicine called Tofersen, which is designed to treat people with this mutation. Unfortunately, they have denied my request, through my physician, to gain access for reasons that have not been explained to us.

My physician is one of the physicians participating in the trials for Tofersen, and he believes the drug may give me more time. And that is all I am asking for: time. My physician says that he has never seen an ALS case progress as rapidly as mine. I’m losing function every week — but it is not too late — and getting access now can preserve my life.

My three sons and my husband, Bob, are my life. My goals are modest and, I believe, realistic. I want to survive long enough to be here for three milestones: to see my oldest son, Scott, graduate from college in May, my youngest, Dean, graduate from the 8th grade, and my middle son, Luke leave for college in September. We believe Tofersen gives us that hope.

Recently, I was able to travel to UNC (my own alma mater) to visit Scott. While there, we set up a ballroom to do a mother/son dance. I did a first dance with all three of my boys. I wish I could’ve frozen time in those moments, but at least they’ll always have those memories. I am begging Michel Vounatsos, Biogen’s CEO, to give me the chance for more memories. Please grant me the Right to Try Tofersen. #tofersen4lisa

Scroll down to comment or leave your thoughts on this article

Leave a response to this article Cancel reply

Understanding Mask Terminology, N95/KN95/N99, and What to Buy

Learn about which masks offer the most protection against Covid-19 and what the terms mean as far as the masks efficacy is concerned. Which mask should you buy.

Setting the Record Straight. Plants and Herbs Have Value.

The Journey from Analog Patient to Virtual Health Consumer

How Do Therapists And Coaches Know If They’re Impacting Clients?

10 Tips for Pumping and Working

Sorry, Alternate Health. We Just Don’t Trust You. Here’s Why